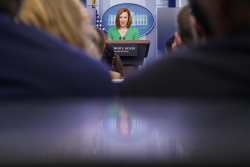 Teddy Roosevelt gave a speech in 1902, “The Management of Firms,” which warned of the hazard of company energy over residents’ lives. Calling companies “creatures of the state,” he stated they have to be managed by “the representatives of the general public.” Roosevelt was a Republican, however his mistrust of companies (and his later religion in huge authorities) would grow to be a touchstone of Democratic politics for generations, from the Nice Despair to the Nice Society.

END_OF_DOCUMENT_TOKEN_TO_BE_REPLACED

The week ahead: Poleaxed to Polexit

Hackers got past Windows Hello by tricking a webcam

Hackers got past Windows Hello by tricking a webcam

Why England's sudden lifting of covid restrictions is a massive gamble